Today the basement level of Union West barely fits an earlier characterization of it as "the university's 'Main Street,' a veritable beehive of activity from early morning until late at night." Before the opening of the Bryan Center, student activities and services were centered in the Union Building. 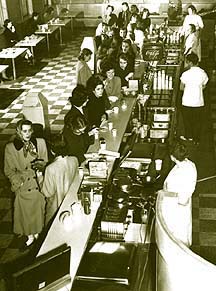 For years, the center of West Campus activity was the Union basement "Dope Shop." The unusual name often caused quizzical looks including those of John F. Kennedy who stopped by for a hamburger on the way to a Page Auditorium lecture the night before he announced his candidacy for president of the United States. Years ago "dope" was a Southern slang term for a cola drink, perhaps due to the belief that Coca-Cola contained a small amount of cocaine. The term was used on campus from at least before World War I when enterprising students opened a shop for candy and tobacco in Epworth and later Aycock dormitories. The most popular drink in the West Campus Dope Shop was a delicious thick milkshake. Quick service was the main appeal, but at various times the store had booths for socializing and a pool table and jukebox as well.

Next door was the University Store selling everything a student needed including school supplies from slide rules to examination "blue books." In September , male students were surprised to discover items like Cosmopolitan and hair spray in "their" store as women moved into West Campus residence halls for the first time. In former years, the clothing portion of the store was know as the Haberdashery, a place "with the well dressed university man in mind." Gradually Duke-imprinted items took over as tastes changed and formal attire gave way to more casual dress.

Across the hall, the University Bookstore sold course required textbooks only. The extremely cramped quarters necessitated sales of most textbooks at the beginning of each semester in the concourse of Cameron Indoor

Stadium where course registration was held.

— an excerpt from If Gargoyles Could Talk by University Archivist, William E. King, Ph.D.

The era of quaint shops on the "Main Street" of Union West is long gone and the Bryan University Center now forms the hub of student activity. So, too, have the Duke University Stores experienced change. From that single store in the basement of Union West to 32 different retail, book, and office service organizations located both on and off-campus, Duke University Stores now ranks as the ninth largest independently operated college store in the US.